MEXICALI, Mexico — In this fertilizer-scented city opposite the alfalfa fields of California’s Imperial Valley, the deported sleep in parks, abandoned buildings and along the train tracks that run through town.

They beg for pesos at traffic lights, squinting in the low winter light, and cluster along blighted downtown streets of dim cantinas and discount pharmacies that advertise cheap Levitra and powdered cobra venom. Dressed in oversized American clothing handed out by church shelters, they look dusty and dazed, like shipwrecked castaways.

The Mexican government considers them “repatriated” persons and offers aid services and free or discounted bus tickets to their home towns in the country’s interior. But many do not get on the bus.

“We’re getting a reputation as a place full of deportees,” said Mexicali’s city manager, Jose Arango. “They’re sent here, and when they can’t get back to the United States, they get stuck.”

Once, border cities like Mexicali (population 700,000) were flooded with newcomers trying to go north. Today, they are filling with obstinate deportees, cut off from U.S.-born children, jobs and car payments, adrift in a kind of stateless purgatory that is beyond the United States but not really in Mexico either. They face a U.S. border that is tougher and more expensive to cross than ever.

U.S. Immigration and Customs Enforcement (ICE) removed nearly 410,000 immigrants during the government’s 2012 fiscal year, an all-time high, and 369,000 this year. About two-thirds were sent back to Mexico.

Bigger border gateways such as Tijuana and Ciudad Juarez used to be the main drop-off points. But changing U.S. immigration policies and, to an extent, the criminal reputations of Mexican drug cartels have made Mexicali the world’s biggest landing pad for sent-back immigrants. At least 113,539 have been “repatriated” to the city in the past two years, according to Mexican government statistics — more than any other place along the border.

The city offers several advantages to U.S. immigration officials. The airstrip in nearby El Centro, Calif., can receive flights from all over the country. The border here is heavily patrolled. And Mexicali does not have a reputation for violence against migrants and deportees, unlike the border cities near Texas, where kidnapping gangs await fresh arrivals to squeeze extortion payments from their U.S. relatives.

The city is the unchallenged domain of the powerful Sinaloa drug cartel and its boss, Joaquin “El Chapo” Guzman, who is said to prefer Mexicali quiet and ­conflict-free, which is better for the business of drug trafficking.

“You don’t have to pay mafia protection here, and the police leave you alone,” said Ricardo Herrera, a 38-year-old auto mechanic who was deported from Los Angeles in 2011 after getting caught driving without a license. “Mexicali is a sanctuary,” he said.

At a church-run shelter in Mexicali, migrants and deportees sit down for a 3 p.m. dinner of beans and potatoes. (Nick Miroff/The Washington Post)

‘I DON’T WANT TO SETTLE HERE’

The stories on the street here follow a pattern. Men crossed into the United States as teenagers in the 1990s, during the historic surge of Mexican illegal migration. Now in middle age, and in a new era of tougher U.S. enforcement, they have been upended by an unlucky traffic stop or incidental run-in with the law. Others earned coveted U.S. green cards, only to squander them by committing more serious crimes that left them eligible for deportation, sent here to stew in their mistakes.

Herrera said his American-born daughter, 15, and son, 9, were back in Los Angeles. “I don’t want to settle here, or get comfortable, or accept this place as home,” he said, selling bottled water and sodas by the border checkpoint, where hundreds trudged along in a single-file line to cross into Calexico, Calif.

His five attempts to sneak back into the United States in the past two years have brought longer and longer stints in federal prison camps on felony charges of illegal reentry, further dimming Herrera’s prospects for ever being allowed to return.

The United States tries to discourage this pattern of behavior — recidivism — in part by transferring deportees laterally along the border, instead of releasing them where they were picked up.

These days, Mexicali’s new arrivals come on buses from Arizona after being caught by the U.S. Border Patrol in the deserts south of Tucson, still the most popular place to attempt an illegal crossing.

ICE officials have come under criticism from human rights groups for sending large numbers of deportees to dangerous cities — particularly at night — in Mexico’s Tamaulipas state, opposite Texas, where migrants have been massacred and gone missing by the thousands.

ICE officials would not say if they have increased deportations through Mexicali because of its reputation for relative safety. The agency said it “works in close and careful coordination” with the Mexican government to “prioritize the safe and humane treatment of individuals.”

Mexicali has five church-run shelters and three government facilities either open or under construction. But the largest number of deportees gravitate to the Migrant Hotel, two blocks from the border gate, where the ICE buses leave them.

The hotel is more like a gritty youth hostel, packed with enough bunk beds for 200 occupants. It opened four years ago on a seedy block of burned-out nightclubs and abandoned storefronts, run by Sergio Tamai, a former Mormon bishop and local businessman turned immigration activist.

“I know a few things about God and what it means to serve those in need,” said Tamai, 61, the grandson of a Japanese immigrant, his makeshift office lighted by a bare bulb. “The government won’t take responsibility for these people, so we’re doing it instead.”

Unlike the other shelters, which limit guests to three nights and lock their doors at 8 p.m., Tamai’s Migrant Hotel remains open all night and does not evangelize. Able-bodied deportees who plan to stay longer are expected to go to work for Tamai and his group, Angels Without Borders, jingling donation cups among the cars lined up at the border. Or they can work at one of the businesses Tamai has opened that caters to migrants and deportees, from an Internet cafe to mini-markets to a discount cafeteria, almost entirely staffed by Migrant Hotel residents, who keep a portion of their earnings.

On the hotel’s ground floor, where mismatched strips of carpets smell of feet and sweat, a Guatemalan deportee, Luis Otero, watched a Mexican game show from a wheelchair, his left leg freshly amputated and sutured above the knee after a fall from a freight train. “I am grateful for this place,” he said. “They treat you with dignity here.”

Drinking and drug use are not allowed at the Migrant Hotel. But Tamai has rented a second place a few blocks away, a 56-room abandoned hotel whose heyday probably peaked in the Prohibition era. It has no electricity, heat or running water, and a bare, bedless room can be had for less than a dollar. There are few rules. Tamai says it’s better than a night on the street.

Flickering candles light its grimy corridors, revealing swirls of dried stains on the bare floors. Doors and wiring and nearly everything of value have long been stripped away, down to the bathroom fixtures, leaving squalid holes to serve as latrines.

“Here I can drink, and no one will bother me,” said Hector Sauceda, who said he was deported two months ago after several years of washing dishes in the restaurant kitchens of San Jose. In a few hours, he would head for the market to unload fruit crates for vendors’ tips.

His mattress was a flattened cardboard box, his bed a pile of soiled blankets. Sauceda said he had no other possessions. “Do you have any extra pants?” he asked. He was saving his money, he said, for the trip back to San Jose. 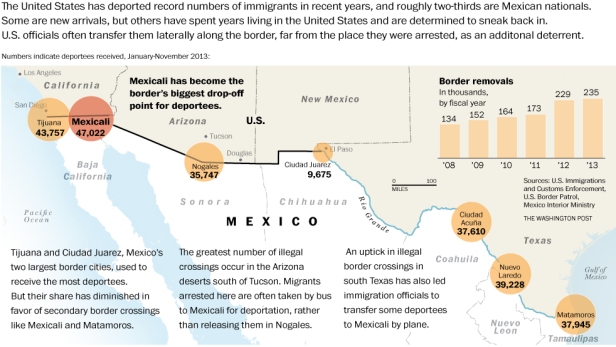